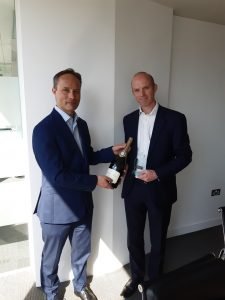 Contestants had to predict the outcome of each of the fifteen Six Nations matches (Home Win, Away Win or Draw), as well as the total number of tries scored throughout the Championship (in case the competition went down to a tie-break!).

The competition saw 50 contestants across Fairgrove’s client network vying for the winning position in a close competition. At the end of the tournament, two contestants topped the leaderboard, correctly predicting an impressive 14 out of 15 results. The perfect set of results for both was only disrupted by Italy’s win against Wales in the final week. The competition was ultimately decided on our bonus points system, based on the number of tries scored in the tournament. Steve secured victory with his estimate of 76 tries, which was very close to the 73 scored. Steve takes home the Fairgrove Six Nations trophy and a magnum of champagne!

This website uses cookies to improve your experience while you navigate through the website. Out of these, the cookies that are categorized as necessary are stored on your browser as they are essential for the working of basic functionalities of the website. We also use third-party cookies that help us analyze and understand how you use this website. These cookies will be stored in your browser only with your consent. You also have the option to opt-out of these cookies. But opting out of some of these cookies may affect your browsing experience.
Necessary Always Enabled
Necessary cookies are absolutely essential for the website to function properly. This category only includes cookies that ensures basic functionalities and security features of the website. These cookies do not store any personal information.
Non-necessary
Any cookies that may not be particularly necessary for the website to function and is used specifically to collect user personal data via analytics, ads, other embedded contents are termed as non-necessary cookies. It is mandatory to procure user consent prior to running these cookies on your website.
Functional
Functional cookies help to perform certain functionalities like sharing the content of the website on social media platforms, collect feedbacks, and other third-party features.
Performance
Performance cookies are used to understand and analyze the key performance indexes of the website which helps in delivering a better user experience for the visitors.
Analytics
Analytical cookies are used to understand how visitors interact with the website. These cookies help provide information on metrics the number of visitors, bounce rate, traffic source, etc.
Advertisement
Advertisement cookies are used to provide visitors with relevant ads and marketing campaigns. These cookies track visitors across websites and collect information to provide customized ads.
Others
Other uncategorized cookies are those that are being analyzed and have not been classified into a category as yet.
SAVE & ACCEPT
Powered by